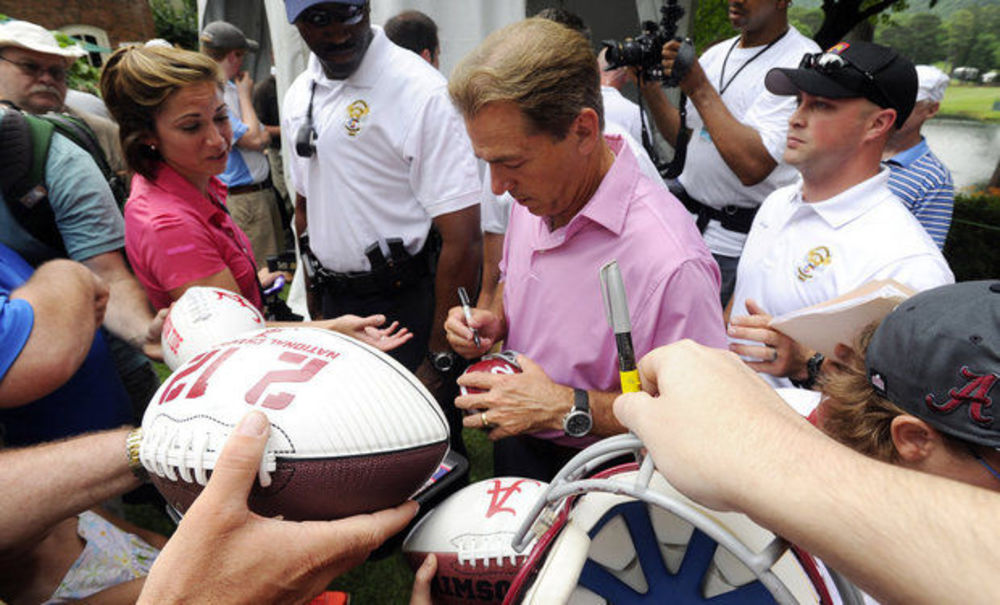 MOBILE, Alabama - He may have been at a golf course Thursday, but for Nick Saban, the purpose wasn't carving strokes off his game or trying to get his swing in order. It was more important than that, he said.

"I enjoy playing golf but there's not a lot of time to play,'' Saban said prior to the start of the annualNick's Kids Fund golf tournament, played this year at the Country Club of Mobile. "This thing that we're doing today, it's really not about the golf. It's about helping people. We certainly appreciate all the people who contribute to Nick's Kids and make the team what it is. We're able to help a lot of people because of it.''

The charity, started by Saban and his wife Terry in 1998 when he was head coach at Michigan State, works as part of the Alma Foundation, a non-profit charity. Last year at its annual giveaway luncheon, the fund distributed $418,644 to a variety of organizations. The total donations distributed by the Sabans and the Nick's Kids Fund in 2012 was approximately $1.2 million. Since the storms of April 27, 2011 that touched down in Tuscaloosa, the fund has distributed more than $1.3 million to tornado relief.

"We all like to give back to the community in some kind of way and this whole Nick's Kids thing is really representative of my father, what he tried to do,'' Saban said Thursday. "That's what Nick's Kids is all about; he was Big Nick and I was little Nick, and he's still Big Nick. My mother always said, 'If you get an opportunity, we want you to do something to enhance your dad's legacy to try to help young people.'

"This profession obviously offers the opportunity to do that. Being in this position and having so much support from the people of the state of Alabama obviously gives us the support to be able to help and give back and help a lot of young people. My happiest day of the year is always the first day or practice when we have all the kids and all the organizations come in and we actually make a contribution to hopefully help them be successful. And all the people who dedicate their lives to help the young children. I think that's something that needs to get recognized that gets overlooked far too much.''

Perhaps the most recognizable project of the Nick's Kids Fund, aside from the annual golf tournament, is its 13 for 13 Home Building Project, which has now become the 15 for 15 Home Building Project. Teaming with Habitat for Humanity, the original plan was to build 13 homes in honor of the school's 13 football national championships. That number rose to 14 in 2011 and 15 last season.

A full field of players attended Thursday's golf tournament at the Country Club of Mobile. While the golf tournament was the main draw along with Saban's appearance, there was also a silent auction featuring a number of Alabama-related items.