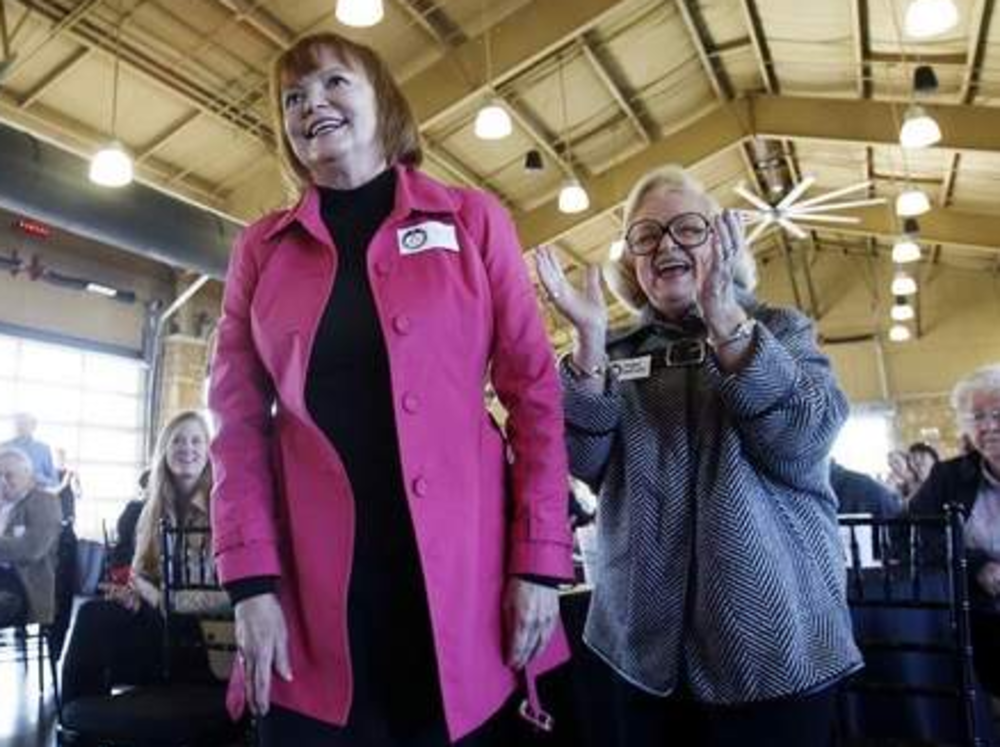 
For many of the friends and colleagues of former Rise School Executive Director Martha Cook, it's hard to imagine the preschool that caters to students with disabilities and their normally-developing peers without its longtime leader whose passion for the work was obvious.
​
Photo Galleries

"She has definitely made the program what it is today," said Franny Jones, interim director at Rise. "She has been there 40 years. It is what it is because of all her hard work."
Cook retired Dec. 1 from the school, which is located on the campus of the University of Alabama.

On Friday, friends Nick and Terry Saban honored Cook for her work at Rise with a lifetime achievement award from their nonprofit Nick's Kids Foundation. The award was part of a luncheon by the foundation to honor Tuscaloosa-area teachers for their service in and out of the classroom.

The lifetime achievement award was the first awarded in the three-year history of the luncheon.
"The Sabans are really close to Martha and wanted to do something special for her," said Katie Mellown of Nick's Kids Foundation.

The Sabans presented Cook with an award resembling the crystal football trophy from the BCS National Championship era of college football.

"That's what Martha deserves, a national championship," Terry Saban said.
It's an award to recognize Cook's service at Rise and the difference it has made in the lives of thousands of families.

"I love Nick and Terry, they are wonderful friends," Cook said. "It meant a lot to me."
It also took some persuasion, Terry Saban said, to get her humble friend to agree to come to the luncheon for the award.

True to her reputation when Cook took the stage, her comments redirected the conversation away from her legacy to something she sees as more important.
"It's all about the children," she said.

On a Saturday in late November as Tuscaloosa buzzed with the prospect of an Iron Bowl victory to clinch a Southeastern Conference championship berth for Nick Saban's 2014 squad, the Rise community had to bury one of its students, the child of a young couple who succumbed to medical problems, Cook recalled in a quavering voice.

It's easy to get distracted by the minutiae of life and lose sight, Cook said. Sometimes, you have to stop yourself and refocus. Sometimes, you get heartbreaking reminders.
"The children are what is important," she reiterated.

Focusing on the children is what took Rise from a fledging school of one teacher, an assistant and six students in an old house to the Stallings Center on the UA campus, according to Cook.
For 40 years, it was less of a job and more of a calling.

"It's just good, like not going to a job, just part of my life and what I do," Cook said.
Cook estimated, since starting in October 1974, she has seen thousands of children come through the school and spent millions off hours with them.

"If you know Martha Cook, you often don't see her without a baby in her hands," Terry Saban said.

Though others call her the heart and soul of Rise, Cook said the school's greatness comes from the team of teachers and others who work together to accomplish its mission.

Jones has served as the interim director since Cook stepped down on Dec. 1. The university is putting together a search committee to find a permanent replacement.

Victoria Peeples, an assistant dean in the College of Human Environmental Sciences, will chair the search committee that will begin the work to find a permanent replacement in January, according to UA spokesperson Chris Bryant.

"It is going be extremely hard to replace Martha Cook," Jones said.