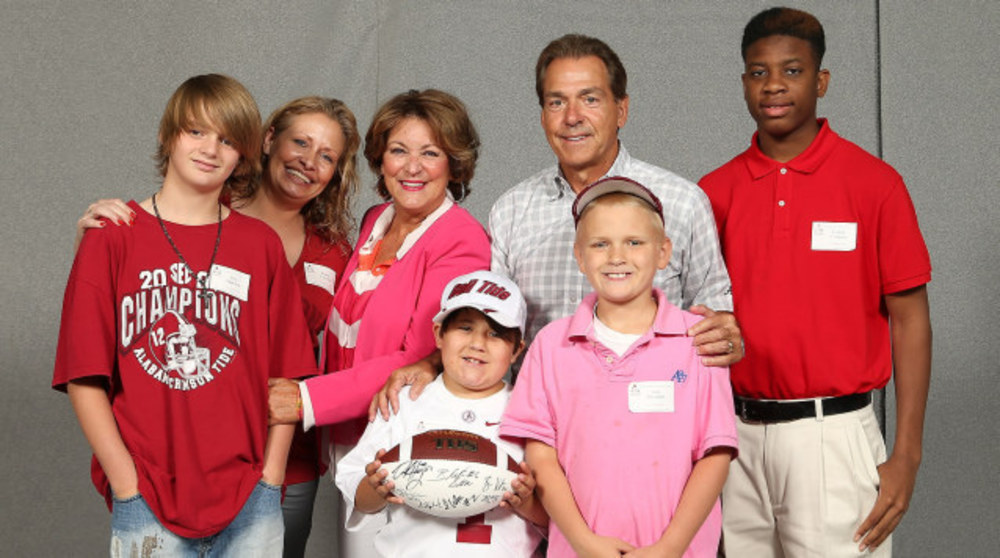 Fund has awarded more than $4.6 million to local and state organizations since 2007

TUSCALOOSA, Ala. - The eighth annual Nick's Kids luncheon was held Thursday in The North Zone at Bryant-Denny Stadium where checks totaling more than $440,000 were presented to 125 local and state organizations. Since Nick and Terry Saban arrived in Tuscaloosa in 2007, more than $4.6 million has been distributed to numerous charities and organizations throughout the state and surrounding areas. This year's total in terms of funds distributed through Nick's Kids initiatives was over $600,000.

"Happiness comes from doing something of significance, and it really comes from doing something of significance for someone else," said Nick Saban at the luncheon. "I would really like to thank all of the people here today that work with the children who really provide the leadership to affect them, so they have a better chance to live a quality life. They really do care about these young people, and they really do serve them every day."

The money is raised through the annual Nick's Kids Golf Tournament, speaking engagements by Nick and Terry Saban, as well as individual donations. For the past two years, the Sabans have also assisted in raising money for various areas affected by the tornado that hit Alabama on April 27, 2011, as well as creating the 15 for 15 Home Building Project with Habitat for Humanity of Tuscaloosa.

"Our motivation for this really comes from my dad," said Saban. "It has been our family's commitment to keep the legacy alive by what he started to try and help young people and give them a better opportunity to be successful. That is certainly why we are here today."

In addition to their work with Nick's Kids, the Sabans have also been generous in terms of their personal donation to The University of Alabama for scholarships. In June of 2008, Nick and Terry made a $1 million pledge to the University for first-generation scholarships.