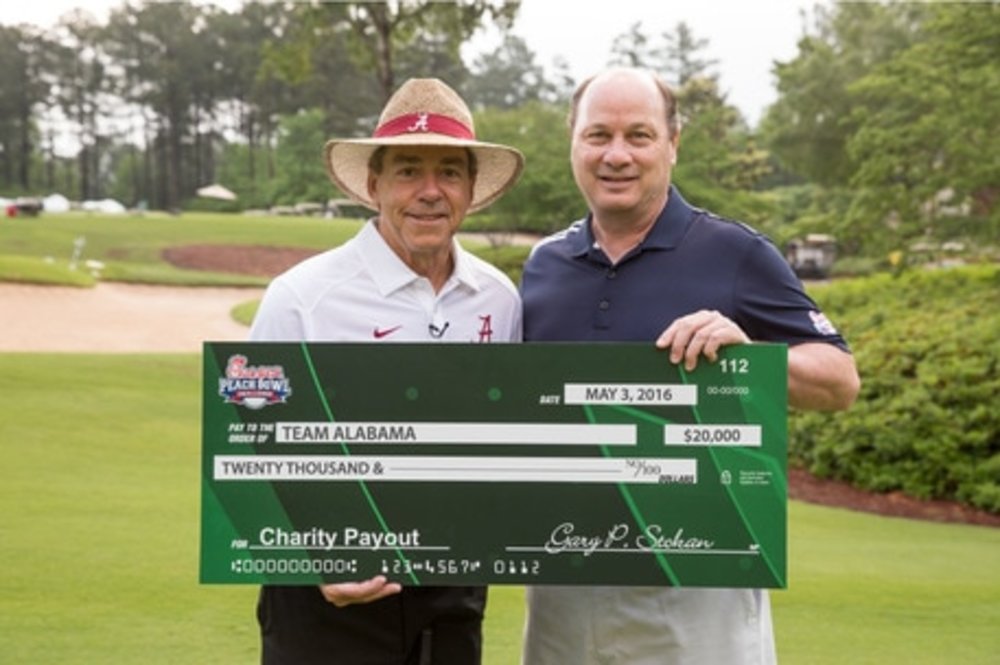 The other $10,000 will go to the Chick-fil-A Peach Bowl Endowed Scholarship at the University of Alabama.

Following its mission to support scholarship and charity at all levels, Peach Bowl, Inc. through its Chick-fil-A Peach Bowl Challenge will pay out a total of $540,000 to its 13 participating teams this year, with the winnings being split evenly between a charity of the coach’s choice and an endowed scholarship at each university.

“We were honored to host Coach Saban and Chris Mohr again for this year’s tournament and congratulate them for their successful efforts,” said Gary Stokan, president and CEO of Peach Bowl, Inc. “We are thrilled to be able to donate $20,000 this year to help both the foundation and the university help others in need. We have now been able to donate $248,000 to Alabama charities through this event since 2007.”

In addition to the $540,000 charity and scholarship purse, another $124,500 was generated for other charitable organizations. Over the last 10 years, the event has contributed a total of $6 million in scholarship and charity, helping make the Chick-fil-A Peach Bowl college football’s most charitable bowl game.


ABOUT THE CHICK-FIL-A PEACH BOWL CHALLENGE
The Chick-fil-A Peach Bowl Challenge is the country’s premier head coach and celebrity charity golf event featuring NCAA head coaches and former athletes and celebrities from the same school competing against their rivals for $540,000 in charity and scholarship. In the past nine years, the Challenge has distributed a total of $6 million in scholarship and charity. The tournament will be broadcast on ESPNU in August and December.

ABOUT PEACH BOWL, INC.:
Peach Bowl, Inc. operates the Chick-fil-A Peach Bowl, the ninth-oldest bowl game in the country and one of New Year’s Six Bowls selected to host the College Football Playoff. In 2014 and 2015, the Chick-fil-A Peach Bowl hosted top nationally ranked teams as assigned by the College Football Playoff Selection Committee. In 2016, the Bowl will host its first College Football Playoff Semifinal (#1 vs. #4 or #2 vs. #3). The Bowl has earned a reputation as one of the most competitive bowls in the country, with 54% (26 of 48) of its games being decided by a touchdown or less. Peach Bowl, Inc. has disbursed $150 million in team payouts over its 48-year history and has increased team payout every year since 1996. The Bowl also leads all other bowl game organizations in charitable and scholarship contributions, giving more than $19.5 million to organizations in need since 2002. Peach Bowl, Inc. also owns and manages the Chick-fil-A Kickoff Game, the Chick-fil-A Peach Bowl Challenge charity golf tournament and is the presenting sponsor and manager of The Dodd Trophy national coach of the year award. For more information, visit Chick-fil-APeachBowl.com or follow us on Twitter at @CFAPeachBowl and find us on Facebook at Facebook.com/ChickfilAPeachBowl.